This photo of C.B. Perdue taken in March 1945 while he was based at Knettishall, England, before he was captured by the Germans during one of his many bombing runs.

I entered the Army July 2, 1943, as an 18-year-old, just out of high school. I was sent to  Buckley Army Air Field for basic training, followed by airplane armament training at Lowry Army Air Field, Colorado.

Aerial gunnery training in the B-17 Flying Fortress at Kingman Army Air Field,  Arizona,  was next. Following gunnery training I joined a B-17 combat crew at Rapid City Army Air Field,  South Dakota, for combat crew training. Our crew was assigned a new B-17 to fly to England, arriving in late December 1944. Leaving our new plane at a pool, the crew was assigned to the 388th Bomb Group,  3rd Air Division,  8th Air Force, at Knettishall, England.

Most of the new aircrews didn’t have a bombardier. That position was performed by the armament gunner,  which I trained for during combat training. Part of that job was to drop the bombs on the target.

Our first mission was February 9, 1945, and the target was Giessen, Germany. As we crossed the English Channel we could see large puffs of smoke from anti aircraft artillery shell bursts.  Arriving at our home base safely, the crew began to count the number of holes in the fuselage we received from the anti aircraft shells – 18. It was a realization that we were lucky that day.

My missions(25) over Germany came to an end April 7, 1945, when our B-17 was rammed by a German ME-109 fighter. We were flying at 18,000 feet with a full bomb load when we were hit near the tail wheel,  severing the tail section. I was in the nose section with the navigator. We got the small escape hatch open and he bailed out first. I followed him and after clearing our crippled plane, I pulled my rip cord and the parachute deployed. That was good to see. As I was floating down, an American P-51 circled me for protection from German fighters shooting me while was dangling from a parachute.

When I was about 200 feet from the ground I could see many Germans sort of in a ring around an open field where  I was going to land. Only one German Army soldier came and took me captive.  Following my capture a group of German Hitler Youth attacked me. They roughed me up before the soldier got them off me.  He escorted me to a jail at a German air field nearby.

I received burns on my face and hands from the parachute silk as it deployed and injured my right knee in landing.

As the rest of the crew were rounded up by the Germans and jailed I learned four of our nine member crew didn’t survive.

This is C.B.’s P.O.W. identification tag, issued to each prisoner at Stalag Luft I near Barth, Germany.

Life at Stalag Luft 1 was not easy. There was not much food. The International Red Cross had sent in food parcels provided by the American government. The German prison camp officials issued the parcels at the rate of half of what was intended for each person. They had very little food for the POWs, black bread, boiled potatoes and stew were some of the food items they gave us.

I was discharged from the Army October 21, 1945. Three months after my discharge, I decided to reenlist in the Army. When the U.S. Air Force was established as a separate service in 1947, I elected the USAF and went on to complete 30 years service, retiring in October 1973 as a Chief Master Sergeant. I then returned to civil service, where I served for many more years.

C.B. flew in a B-17 similar to this one in his missions over Germany. This particular drop is a “salvo” bomb release, meaning all of the bombs were dropped at the same time.

This is a list of C.B. Perdue’s 25 missions in the European Theater during WWII:

These are telegrams written to C.B. Perdue’s mother, Lillian, after C.B. was missing, and the second is when he was returned to the U.S. military control after liberation from the POW camp. 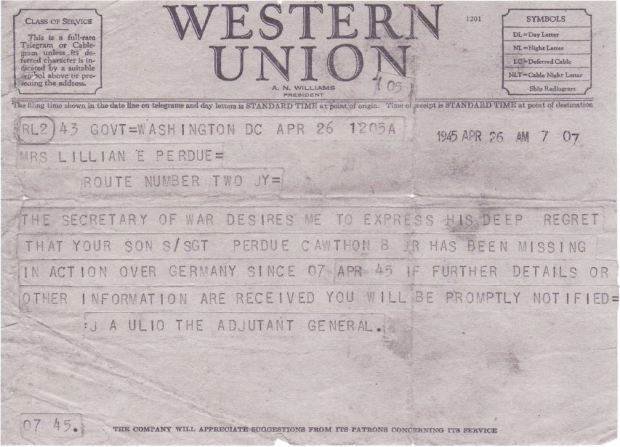 Life in the prisoner of war camp was not easy! One of the small things prisoners were given to eat daily was something called “Black Bread.” Here is the recipe for this concoction, courtesy of an article in the Ex-POW Bulletin: